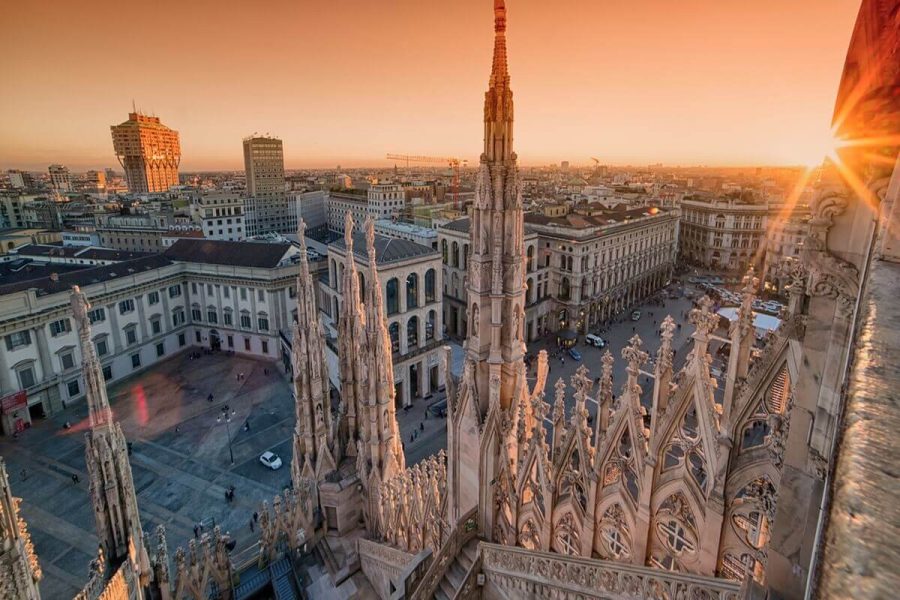 Milan is an absolute behemoth of a city and has the most populated metropolitan area in Italy with 1.3 million people, and 3.2 million in the wider area surrounding central Milan. Some form of human settlement has been present in the region of Milan for thousands of years and archaeological findings date back as far as 222 BC. Indeed, at one point, Milan served as the capital of the Western Roman Empire.

Throughout antiquity, the middle ages, and later, Milan prospered greatly due to its commanding location in mainland Italy. Although the city was damaged during WW2 it has recovered and saw a huge economic boom that accounts for its large growth and expansion.

Today Milan offers a sublime mix of historical architecture, modern high-rise skyscrapers, all mingled together with a dash of Italian life. The city is particularly known for its abundance of high end fashion retailers and the beautiful Duomo Cathedral.

Milan Cathedral is a truly monumental building and is famed for its sublime architecture and took over 600 years to complete.Located in the centre of Milan in the self-named Piazza del Duomo, the cathedral was constructed in 1386 but not officially completed until 1965! With an Italian Gothic style, the front façade of the cathedral is truly magnificent and is crowned with countless towers, statues and decoration.

Although the exterior of this church is not one of the most renowned, it still has a certain charm and grace – Created in 1497, the church features a Gothic style using red bricks and a large rear basilica.This church can be found on the Corso Magenta and sits at the opposite side of Milan to the Duomo.Inside the building lies one of the greatest artistic masterpieces in the world – The Last Supper by Leonardo di Vinci.

As you walk into the Grand Gallery, you might think you were stood inside the entrance hall to an opera house or palace – Not a shopping mall.But this is essentially what the Galleria is – An extremely opulent and extravagant indoor shopping area.Created in 1877, it stands as one of the oldest shopping malls in the world and was designed by Guiseppe Mengoni.The cross shaped mall is covered via four glass panelled arms that let in the sunlight perfectly, whilst the walls and shop fronts are decorated with ornate panelling and stucco artwork.

This 15th century castle has a central location in Milan and is set in extensive grounds and gardens.Created in 1370, the original design has been modified and added too greatly but still retains its elegance and status of power.At the front of the castle stands an immense brick wall lined with battlements and frame by a central guard tower.As you walk through into the central courtyard, you will notice the large guard towers and the sheer size of the castle will amaze you.

Located in the Palazzo Brera, the Pinacoteca is a fine Art Gallery that contains a large collection of Italian art.In earlier years the palace served as a convent and as a national library and was not converted into a museum until the 19th century.Inside the gallery, you can find such works as the Marriage of the Virgin by Raphael, Pieta by Bellini, the Last Supper by Rubens and the Adoration of the Magi by Correggio.Located in close proximity to both the Sforzesco Castle and the Piazza del Duomo, the Pinacoteca di Brera is easily accessible.

This ancient building is one of the oldest in Milan and was built in 379 AD by St. Ambrose.With a simple Romanesque design, the style of this church has not changed much since its creation and the city of Milan was built up around it, as it served as a focal point for the local population.Two large towers frame the front façade and a central courtyard is frame via a series of ornate arches.

Leonardo da Vinci was a legendary man of true genius and he was much more than an artist – He was a true visionary, and inventor and a scholar.It stands to reason that a museum named after this man contains many of his works and a huge collection of other important scientific and technological displays.As one of the most important museums in the world, you can expect to find such collections as a myriad of model cars created from da Vinci drawings, reconstructions of his flying machines, and a plethora of his drawings, blueprints and sketches.Aside from works by the man himself, there is also a huge collection of important scientific inventions and pieces of breakthrough technology that changed the world.

Once the centre of Milan during the Middle Ages, the Piazza dei Mercanti was a true hub of activity and held many merchant activities and trade markets. Located in-between the Piazza dei Duomo and the Piazza Corduiso, this square is within walking distance of the main sights in Milan. Several important buildings stand in the square including the Pallaza della Ragione, the Pallaza delle Scuole Palatine and the Loggia degli Osii. Furthermore, several important statues and monuments can be found here, some of which have Roman origins.

Dedicated to the history of ancient Milan, this museum is truly insightful and gives you a glimpse of a time long past. Located in the Chiesa di San Maurizio al Monastero Maggiore, the first part of the museum details the history of ancient Mediolanum, whilst the second part located in the basement has a selection of artwork and sculptures. Included in the extensive collection are various archaeological remains, theatrical masks, pottery, and armour.

As the central Piazza in Milan, the Piazza del Duomo is an immense open public space that features some impressive architecture and sculptures. If you are visiting Milan, this should be your starting point – From here you can view the wonderful Duomo and surrounding buildings. In the center of the square stands a glorious statue of the first King of united Italy – Vittorio Emmanuel, whilst on one side sits the impressive Royal palace.

Walk down the Naviglio Grande

Not many people realise that Milan actually has two canals, one of which is the Naviglio Grande – This canal stretches from the Porta Ticinese to the Ticino river some 50km to the west. Constructed originally in 1177, the canal was worked on for many years and continued to expand into what it is today. The section of the canal situated within the city centre is a fantastic place to walk and is lined with old buildings plus a variety of shops and restaurants. Stroll down a section of the waterway and admire this different part of Milan that is seldom seen or listed in tourist guides.